BEETLEJUICE IS THE BEST!! ^^

The most refreshing part of Victor Crowley was that it was not bogged down (pun intended) by unnecessary back story justifying the villain and his behaviour. I have really disliked the trend of director’s releasing biopocs of my favourite senseless killers, like Rob Zombie’s Halloween or the 2017 movie Leatherface. What attracts me to these villains is their senseless violence and mania, not trying to figure out why they are that way. To me, a slasher villain is a hurricane, some careless and destructive act of nature that you don’t want to cross.

Victor Crowley was, in contrast, a straight-up gore flick: another installment of a group of people who cross paths with the murdering monster Victor Crowley. While the storyline was flimsy and the characters a bit annoying, the face-smashing, decapitating and disemboweling made up for it.

This installment of the Hatchet series won’t be my favourite, but it holds a deserved place within the canon.

Book review
Agatha Christie’s By the Pricking of My Thumbs

I consider Agatha Christie a horror writer because, in practically any library, you are sure to find a macabre tale of murder by her. She was the first mystery writer I discovered, and I remember the thrill of being young and being allowed to read her murder stories. She was, in fact, my first inspiration to become a writer myself. I remember plotting out complex and devious murder schemes in short stories, written by hand in flimsy composition notebooks.

While shopping for a Stephen King book recently, I found a large selection of Christie novels, and chose By the Pricking of My Thumbs for its rich title … and for being a reference to the three witches in Shakespeare’s MacBeth. Sold!

The story turned out to be quite different than I expected, but intriguing just the same. The main characters were older, so the pace of their lives and their stories were very different from mine. But, Christie made them unique and engaging, and their wandering whimsies and desires led them toward both discovering and solving a long-held mystery, which was fun. The story ended with a surprising attack of the villain on the protagonist: one old lady trying to kill another while locked in a hidden room … priceless!

My favourite narrative tool that Christie used in this book was to play with two narrators. It began with the husband and wife, and then followed the wife. About halfway through the book, the wife encountered danger, and the story followed the husband for a while. This created a tension in me that I was not expecting. At that point in the narrative, I was feeling really attached to the wife. Then finding myself in her husband’s shoes and worrying about her made me feel even more scared for her. I thought that was brilliant. 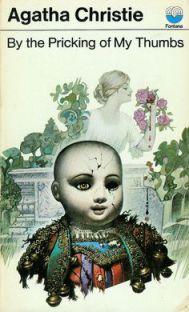 Christie, Agatha. By the Pricking of My Thumbs, Williams Collins Sons & Co Ltd, 1968.

The Peanut Butter Solution is a Canadian, family-friendly horror classic. The story centres around a kid who lost his hair from fright after visiting a scary, abandoned house. He then gets a recipe from a ghost to grow his hair back, but this solution only leads him into the hands of a villain.

Watching The Peanut Butter Solution as a kid, I liked that it was funny, scary and bizarre. Even as an adult, I don’t think that I have ever seen anything quite like it. With a bit of an old school Degrassi feel to it, this movie is fun and worth a watch if you haven’t seen it yet.

I love discovering that a personal horror-film favourite is based on a novel:

“Psycho was the first movie adapted from a novel by Robert Bloch (1917-1994), and despite its great success, he only received $9,000 from selling the film rights to his novel. However, the movie helped his career tremendously, and he wrote for a number of films and television shows over the next three decades, most of them in the horror/thriller/suspense genre, such as The Night Walker (1964) starring Barbara Stanwyck, and Strait-Jacket (1964) with Joan Crawford.” (from Trivia & Fun Facts About PSYCHO by Turner Classic Movies)