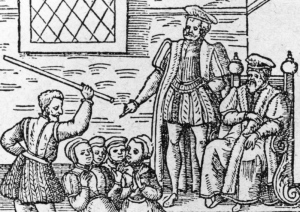 Isobel Goudie is a 17th-century Scottish woman famous for having been recorded as confessing to be a witch—to describing a shape-shifting spell and consorting with the devil. Reading about her confession on the Spooky Isles blog, it’s hard for me to believe in its authenticity. To me, her confession reads more like a propaganda pamphlet, which were wildly popular in the nearby London at that same time. True crime stories were particularly popular, and Isobel’s confession reads like a sensational pamphlet. It would be interesting to learn more about this case to see if the origins of the document have been verified as being legal.